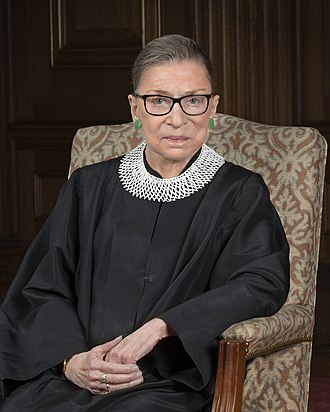 A giant in the legal world, and our country as a whole, passed away last week. Supreme Court Justice Ruth Bader Ginsburg served for 27 years in the highest court in the United States. She is most well known as a champion of women’s rights.

As a law student, she became the first woman to serve on the editorial staff of the Harvard Law Review. While they were students at Harvard, Ginsburg cared for her husband Martin, who was diagnosed with cancer. They moved to New York City after her husband accepted a job there. She finished her degree at Columbia Law School.

In 1970, while a professor at Rutgers University, she worked with the American Civil Liberties Union (ACLU) on two gender related cases. One of them, Reed v. Reed, was the first gender-based statute struck down based on the equal protection clause (14th Amendment) of the US Constitution. After this case, she worked for the ACLU. There, she became a leading figure in gender-based litigation. During that time, she argued in front of the US Supreme Court six times, and won five of those cases.

From 1980 to 1993, she served on the US Court of Appeals, District of Columbia Circuit. And on August 10, 1993, she was sworn in as the 2nd woman to serve on the US Supreme Court. While on the court, she was known for her writing in both majority and dissent opinions. Many of her most well-known rulings are related to gains in gender equality, including women at the Virginia Military Institute and equal pay.

Justice Ginsburg received national accolades when she was named one of Forbes Magazine’s 100 Most Powerful Women from 2004 through 2011. And in 2010 received the American Bar Associations highest honor, the ABA Medal.

Schiavone Law Group honors Ruth Bader Ginsburg for her tireless service to the United States of America’s Judiciary system. May her memory be a blessing.