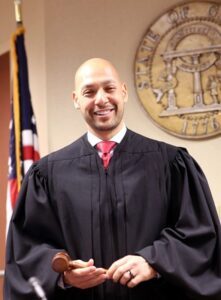 In every profession, we all hope for someone to come into our experience and help mold the way we understand, perform and ultimately define our work.  For me, that person was Ramón Alvarado.  I didn’t know, however, that by being a mentor and guide for me as I took on the practice of law in 2008, he would grow to become a close friend. On July 20, 2020, Ramón passed away from complications that followed a stem-cell transplant to treat the acute myeloid leukemia he had been diagnosed with a year earlier.  As I continue to process his passing and search for the right words to capture the person and friend that he was, it occurred to me that I might put pen to paper and dedicate my August blog to him.  I’m still struggling to find all of the right words. But, I hope for this blog to be a tribute of sorts.  It only scratches the surface of how Ramón touched so many lives and professions, but it’s a small glimpse into how he helped shape my own.

I first met Ramón at the Bill Daniel Trial Advocacy Program sponsored by the Georgia Association of Criminal Defense Lawyers, otherwise known as “GACDL.”   This is an enormously beneficial program for any young lawyer with limited trial experience.  The program teaches you trial skills in a very hands-on approach. Meaning, you have to get on your feet and speak.  I’ll never forget giving an opening statement in front of one of our instructors. He was a lawyer whose quiet confidence and calm demeanor intimidated the hell of out me.  It intimidated me because I knew he was good.  I wanted to be good in front of him as his student.  What I learned from Ramón during this program and initial introduction would only continue to grow.

A year later, at an annual GACDL fall seminar in the north Georgia mountains of Young Harris, Ramón and I had the chance to socialize as colleagues.  It was a more relaxed environment than the student-teacher dynamic. We shared a lot of laughs. I had a sincere feeling that this was a person who might become a real friend.  I wasn’t wrong.

I shared with him what I thought was a bit of a nerdy “study guide” I’d fashioned while working as a young associate at the well-known DUI law firm of Head, Thomas, Webb and Willis. I made it as I was trying to feverishly wrap my head around DUI law.  Using the law school format of outlining cases, I made an outline of every significant DUI case that came across my desk.  I am a visual learner so it helped me and it continued to grow in size.  When I shared it with Ramón, he immediately told me this should be a book.  I was hesitant, a bit insecure and under-confident.  “Who was I to write a book? My notes are for my own knowledge and sanity. I’m certainly not qualified to help others.”  That quiet confidence I mentioned earlier about Ramón?  It’s annoyingly wonderful because he didn’t let up on this idea until I believed in it, and myself too.

From there, my first and only publication so far, “Defending DUI:  A Case Outline” was born. Ramón and I wrote it together for several years before he turned it over to me completely. I suspect that he wrote the book with me in the beginning to give me the head start that I needed to take off with it on my own.  I’ll forever be grateful that he pushed me.

In January 2012, I took the plunge and formed my own law firm.   Common in private practice, I moved to different office spaces frequently. Finding a place to hang your shingles while navigating manageable overhead is often a very fluid process.  After spending some time in a great office building, I decided to move on and opted for a more remote space in my main area of practice, Gwinnett County.  I was months into this new place and it was working out perfectly for me.  Then I got the call from Ramón.  He needed a renter in the office he owned, and he wanted it to be me.  I politely thanked him but told him I had a grand little setup at an office-share building in Gwinnett County. I was therefore saving a lot of money in overhead.  In true Ramón fashion, he wouldn’t budge.  He offered less than the amount I was paying so I couldn’t say no.  This move led to so many memories and stories as we worked side by side in his building, it would take me forever to recount it all.

I’ll give the highlights from here. Let’s just say we laughed a lot, commiserated about the endlessly crazy practice of law, and had delicious food at Samurai Blue, one of Ramón’s favorite lunch spots in Norcross.

Our friendship and office sharing led to some of the most interesting cases I’ve ever worked on in my career as a criminal defense attorney.  Ramón had a knack for snagging challenging cases.  He also took great pleasure in hooking me in to help. I couldn’t be more thankful, because the chance to learn was invaluable.  One case I will never forget, because it seemed to go on forever.  After losing a tough and complicated DUI case in a jury trial, Ramón’s client opted to challenge the guilty verdict on appeal.  Ramón needed someone to substitute as counsel and continue the appeal, in the event he needed to testify to substantiate a need for a new trial.  It was my first Motion for New Trial, in front of one of my favorite judges in the State Court of Gwinnett County. To say I was nervous is an understatement. During the original trial, the State admitted into evidence, over objection, the medical records of the Defendant showing an alleged blood alcohol content of .490. This was problematic because when asked to give a state administered chemical test, our client exercised her right to refuse.  But, she was taken to the hospital for clearance before being booked into jail on her DUI charge.  So the State secured a search warrant for the results of any blood that was taken at the hospital as routine procedure. In our Motion we emphasized “[a]lthough the medical records state this is a serum alcohol screen and there is reference to a blood test, there was no evidence presented by the State that this specific method of blood testing used has reached a scientific stage of verifiable certainty, nor was there testimony or citation to authority establishing that the method of blood testing used in this case is a procedure recognized in a substantial number of courts.  The record is simply void of any evidence or authority required under Harper.”  Essentially, we argued that a blood alcohol result from a routine hospital blood draw is not equivalent to a forensic blood draw that is requested and used in the prosecution of DUI cases.  We also argued that the State didn’t meet their burden of laying a proper foundation for its accuracy.  Ultimately, we lost, but it sure was fun arguing it.

Another notable case is the aggravated assault trial for a high school student who found himself in a fight with another classmate that had been persistently bullying him for months.  As second chair in that trial, I watched with awe as Ramón questioned multiple witnesses who helped paint the picture of the way in which our client had been bullied, taunted and harassed. This ultimately lead to a Not Guilty verdict by way of “jury nullification.”  To see a “jury nullification,” I imagine, may be akin to witnessing a shooting star.  It doesn’t happen often, but when it does, you never forget it.

Often when Ramón had a client with a co-defendant in need of representation, he would ask me to help so we could coordinate a solid defense.  One case was close to two hours away in Blue Ridge, Georgia. Ramón successfully bribed me with the promise of a ride to court and breakfast on the way.

When Ramón applied for the judicial seat in the Recorder’s Court of Gwinnett County, I knew he would get it.  The judicial committee that appointed him saw what we knew to be true: integrity, compassion, and diligence.  It was as if he was always meant to be on the bench. I wish his time could have been longer.  When he was appointed, Ramón had to close down his criminal practice before putting on the prestigious robe. That meant handing over his pending cases.  I remember the day he asked me into his office and told me that he’d like to give some of his cases to me.  He trusted me to handle the clients who put their trust in him and that felt like an honor.

One case stands out as significantly meaningful to me. I could go on and on with cases we’ve shared, but I’ll end on this.  A young college student was charged with Aggravated Assault. But, he was clearly defending himself after being attacked by another student that had repeatedly been bullying and threatening him on campus.  Sound familiar?  I told you Ramón had a knack for snagging the challenging cases.  When Ramón took the bench, this particular case had yet to be indicted. So I met the family of this young man early on.  They are a lovely, wholesome, and loyal family. When you’re around them, you feel like one of the family too.  My client was a slightly shy, bright young man whose college journey and personal life were shattered by this arrest.  After many conversations with my client and extensive review of discovery, it was clear to me that this was a case of self-defense.  There was surveillance video of the college dormitory laundry room where my client was assaulted while doing laundry by himself late one night. It irrefutably showed that his reaction was in response to being attacked.  In fact, after my client was able to get away, he was the one who called 911 to report that his attacker had been injured.  I lost sleep over this case, many nights.  Ramón would always tell me “[i]t doesn’t matter if the D.A. doesn’t see it your way and gives you a bad offer, you’re going to win the case anyway.”  His quiet confidence calmed me in moments where I felt overwhelmed with the weight of my client’s future.  In the end, Ramón was right.  It took some time, but an Aggravated Assault charge, one that carries up to 20 years in prison in the state of Georgia, was ultimately dismissed.

As I write this blog about Ramón, I have a college assignment saved to my computer that a current client of mine wrote about me.  As an aspiring lawyer, he was asked to write a paper for his Criminal Justice class documenting his observations of a real-life court session.  When COVID-19 hit, he found a more creative way of completing his assignment by interviewing me for his paper. This client was given to me by Ramón.

Ramón may not be sitting next to me in future trials or sharing laughs with me at lunch, but his memory serves as an inspiration going forward.  It will forever be present.